The March 14th Business and Community Showcase in Lake Zurich had over 1200 visitors.  The theme for the Stratus Concept booth took its cue from the date 3.14.15 aka – Ultimate Pi Day.  I gave away Pi tattoos and wore my once in a century tee shirt. 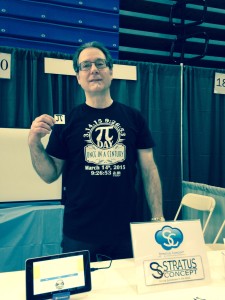 On a serious note, I demonstrated the iOS and Android Mainstreet Resources app that was delevoped for Mainstreet Organization of Realtors and was just launched in February.

I also talked about my Cloud Infrastructure as a Service and played videos about Office-in-the-Cloud and Desktop-as-a-Service.

If we met there, thanks for attending.